The Babies Are Grown

Posted on January 9, 2017 by bluestempond

Back in July I invested a small amount of cash in six baby chicks. I purchased Isa Browns because my “Isa” was a consistent daily layer of one jumbo brown egg. I watched them grow from sweet fuzzies to gawky dinosaurs running in a pack from corner to corner, avoiding the pecking beaks of the adults. I protected them with their own fenced area that the big birds couldn’t squeeze into until it seemed they had crossed the threshold of adulthood and needed to enter the coop to keep warm at night. I worried over them as they resisted that transition and tried to encourage them with no success. 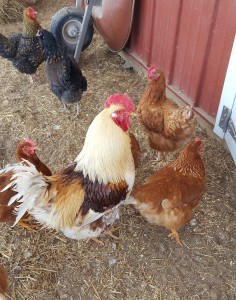 Well, I am happy to report that the transition has completed, at five months of age. While we were away on a little vacation, the chicks began laying little brown eggs and sleeping up on the roost with the rest of the flock. They no longer seem to be getting bullied by the big girls and here they are clustered around the rooster like devoted groupies. The only way I can tell them apart from Isa, herself, is the smaller immature combs on their heads.

I wasn’t expecting eggs from this younger generation until spring, but they are suddenly producing four or five a day. They have very hard shells as my other chickens did at first, and they are decidedly “medium” eggs. I have gotten accustomed to the large to jumbo eggs from my big girls and this abundance of little almost-round eggs is interesting. See the difference between Isa’s jumbo egg over on the right and the large blue ones from my Araucanas.

This is fun to observe. The babies grew up running freely about the barnyard all day, and being cooped up by the snow is something new for them. They still stick together in a pack and my farm-sitter said they fought back with their beaks when he tried to herd them into the coop. Life in the flock will be changed forever by their influence. Hopefully for the better – I am not looking for an “Animal Farm” revolution.

Hobby farmer living at Bluestem Pond in Michigan.
View all posts by bluestempond →
This entry was posted in Farm Animals and tagged chickens, first eggs. Bookmark the permalink.

4 Responses to The Babies Are Grown