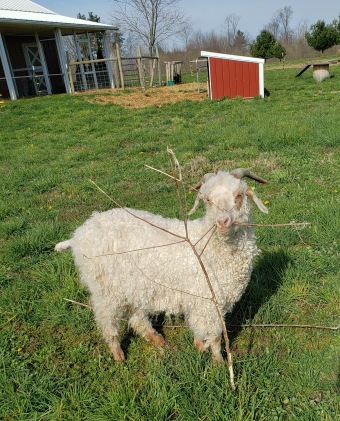 I’m sad to say that we weren’t able to pull Ely back from his illness and had to have him put down last week. Our farm animals are pets, so while it is not as devastating a loss as when you lose a house pet, we took it hard. However, the best way for me to move on is to plan for the future.

I put a lot of thought into what to do next. Eddy was quite bored and lonely with no playmate while Ely was ill, so I’d been making a point to go out and play with him – hide and seek around the shed, treks together out into the pasture, and petting sessions up on his wooden climbing spools. As goats are very social animals, the option of just keeping one solitary goat is not on the table.

Angora goats can be a lot of work. They need their hooves trimmed and meds to stave off worms and lice on a monthly basis. They need to be sheared twice a year. They are full of mischief so you have to continually foil their plans to alter their environment if it is not in their best interest. I was already researching options to get a second Angora. Females are hard to come by but there were a couple leads on wethers (neutered males). The youngest was 2 years old and would be a challenge to transport as they are between 150 and 200 pounds.

As I began thinking about it, it occurred to me that perhaps I could get some other breed of goat, one that is smaller and easier to handle. This led to research on whether a mixed herd would bond, with inconclusive results. I have a couple feelers out there for young goats of various breeds. Then I began wondering whether I could mix a herd of goats and sheep successfully. I learned that sheep require a whole lot less effort, you only shear them once a year, and their wool may be easier to work with than the mohair to which I have become accustomed. 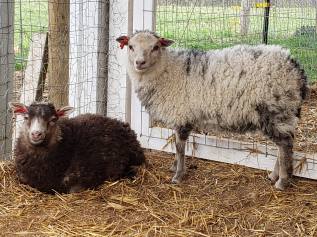 As email replies to my inquiries began rolling in, things started moving fast. We know of a farm that raises Shetland sheep, a small and hearty breed with nice soft wool. They actually were selling off the last few of their spring lambs and we arranged to drive up to see them the next day. Just like that, we made the somewhat impulsive decision to buy two little females and here they are!

These little darlings are sisters and as adults they will have white and cream-colored wool for me to shear, dye, and spin. A bit after the fact, we are now mulling over strategies for taming them so they are not so skittish and integrating them safely into the Eddy herd. His play can get a little rough with those long pointy horns and he outweighs them by about 150 pounds. So far, they have sniffed each other through the fence and the lambs seem less afraid of Eddy than they are of me.  I made a video you can watch.

So, off we go on another farm odyssey! I have yet to decide whether we’ll bring additional goats into the fold but for now I have new little lives to watch over and I hope I am able to do it well.

4 Responses to Goodbye and Hello